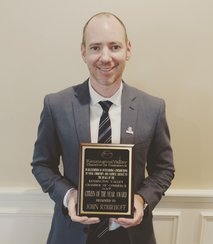 Congratulations to John Rohrhoff for earning the Citizen of the Year for the Kensington Valley Chamber of Commerce 2017.
John Rohrhoff lives in Brighton, MI with his wife Katie and daughters Payton and Morgan. John is a financial advisor and owner of JR Financial Services, located in downtown South Lyon. John is also the President and Co-Founder of The Riley Katheryn Foundation, a charitable organization named in memory of the daughter John and Katie lost at birth in 2009. The foundation was started in 2015 and its mission is to raise money to help families pay for funeral and burial expenses, as well as provide support for the loss of a child under the age of 1 in the state of Michigan. 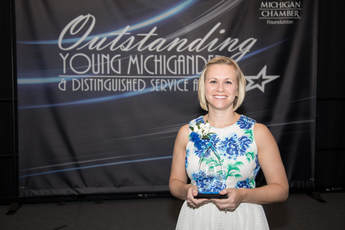 ​​
Congratulations to Katie Rohrhoff. She was a recipient of a 2018 Outstanding Young Michigander Distinguished Service Award. This award recognizes outstanding community leaders age 21 to 40 from around the State of Michigan.
A video sharing her story of The Riley Katheryn Foundation is below.
Katie Rohrhoff and The Riley Katheryn Foundation were also recognized by the Star Legacy Foundation earning the 2019 Star Award for Stillbirth Family Support. This award is determined by families and advocates in the pregnancy loss community.